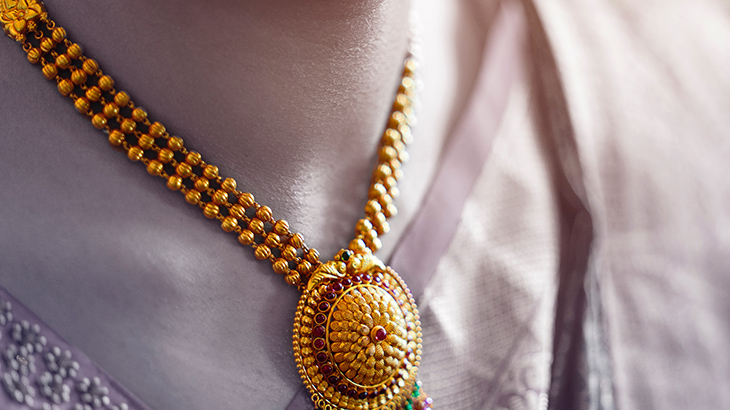 SouthIndianJewellery for long has been revered for its beauty, impeccable detailing, and for the supremacy of replicating temple architecture in the designs. South Indian jewellery carry with them a highly traditional vibe and are assumed to be an adornment for weddings, house warming ceremonies, and other such functions. However, the myth is now beaten by the new age Jewellery items that are outlined in the traditional South Indian context but have a cocktail mix with variations plugged into them. The resultant Jewellery is of course designer pieces that carry a South Indian aura with an edgy modern touch.

Here is a quick style check that revisits the grand classics of South Indian Jewellery and how the new age designers have overhauled them to aptly fit the millennial minds.

A heritage piece that is overpowered with petite pearl beads across the length of the design, the guttapusalu with its fringed pearl clusters closely resemble the shoal of small fish. The design is said to have cropped from the fisheries belt along the Coromandel coast. Guttapusalu design is now incorporated into modern gold necklaces, giving them a touch of tradition. Few designs are rendered with meenakari enamel work and outlined with guttapusalu while some others are purely chiselled with guttapusalu and variated with gemstones.

Kasulaperu- The Telugu name is referred to as KasuMalai across Tamil Nadu. It is made of either plain gold coins or coins embossed with Goddess Lakshmi on them. Traditionally the Kasulaperu is lengthy and can be conveniently replaced by a haram. But given the age and time, the designers have kept the Kasulu intact and revised the lengths, making it a Kasula necklace. The conventional Goddess Lakshmi embossment is also replaced with Ram Parivar mudra, giving birth altogether to a new clan of designs. They also introduced South sea pearl dangles, ruby potas, small emerald and ruby stones and a whole lot of contrasting stone &beads mix. You can mix and match them with Kasula earrings, Kasula bangles and ladies gold ring too.

As the name suggests, the auspicious mango leaves render the base for this kind of Jewellery. Mango leaves are the prime most when it comes to decorating one’s house during any festivities. With umpteen health benefits, mango leaves are customarily used as festoons, and in pooja too. Taking this as an inspirational base, the mamidipindela designed necklaces, and harams are extensively bought across South India.

This traditional design is now blended with necklaces, harams alongside embellishments such as gemstones, corals, pearls etc to give it an oomph factor.

Symbolizing royalty, the soul of SouthIndianJewellery remains in its treasured items like the one listed above. Alongside these other designs such as the Kante, Chandraharalu, Gullaperu also speak about the quintessential aspects of South Indian designs.

In your quest to bring home a treasured possession, do not miss adding the above designs to your bling box. They are revered, timeless, classical, and are an evergreen model given any age, and generation.

Is Bioplast ok for piercings?